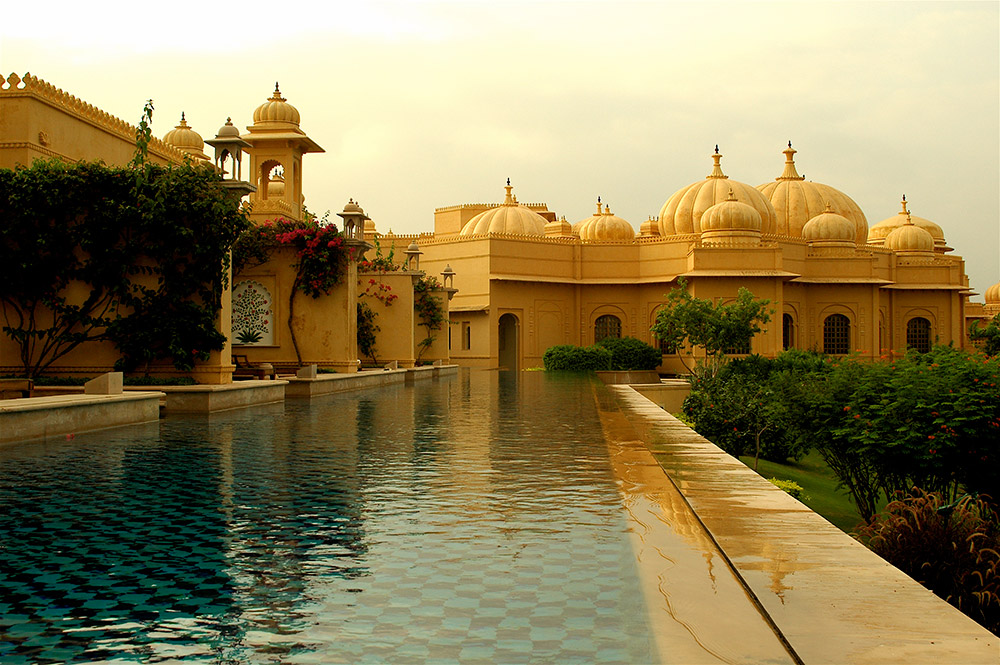 In the first of a 3-part series, David Allardice describes his experience of luxury in Rajasthan, how India “gets it right”, sets the standards for and delivers on luxury service and experience like nobody else. Lastly he reviews the new Taj Hotel, Cape Town and discusses how the Taj as a global luxury brand will be received in the South African context.

I had just come off the wild, dusty plains of the Rann of Kachcch (Kuchcch or Kutch), Gujarat, India’s eclectic wild west, home to the colorful semi-nomadic tribes who inhabit the immense salt flats together with the endangered Wild Ass and Imperial Grouse, which I was to find out later, was a favourite target for social hunting and sport during the time of the British Raj. Gujarat was a compelling start to my 3-month India sojourn: raw, gritty, dry (it is also Jainist so alcohol is forbidden) and mostly devoid of the intended upmarket premium accommodation, infrastructure and services found so liberally in Rajasthan and which was to feature so strongly in the Frommers India 4th Edition guidebook for which I was writing.

Entering Rajasthan over the Aravalli Hills, an 800km stretch of undulating pre-Cambrian fold mountain which pre-date even the Himalayas, I headed into the quaint lakeside town of Dungapur for Udai Bilas Palace, a living Deco Museum, and my first gin and tonic in over a month. Immediately I recognised a change in the overall experience: the ambience, the state of the buildings, the architecture, the tone and manner of the staff, the service, the attentiveness, it was all different, the overall approach was proper, in the true sense of the word. 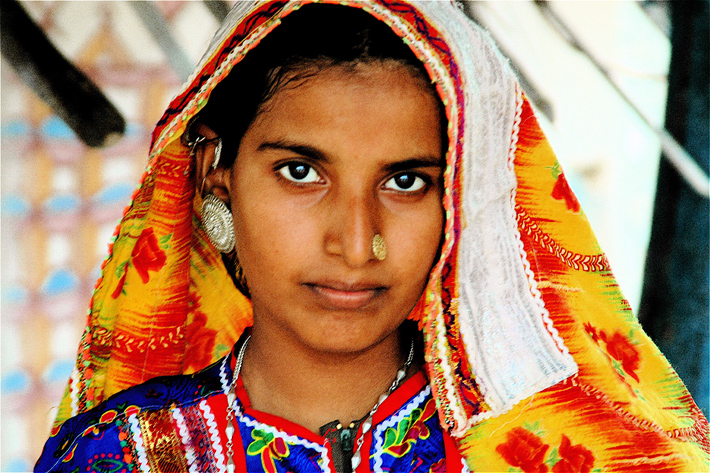 Rajasthan is renowned the world over as the very essence of India, with crenellated forts and impregnable palaces that rise like giant fairy-tale sets above dusty sun-scorched plains and shimmering lakes. Today the principal attraction of Rajasthan, India’s second-largest state – the post-independence name for Rajputana, literally “land of princes” – is the variety of forts and palaces its aristocrats built throughout the centuries, usually on breathtaking sites, that makes it one of the most popular destinations in India. But Rajasthan offers much more than Rajput warrior history, desert castles and culture – it offers an unparalleled experience of gracious hospitality, elegance, luxury and exceptional service. 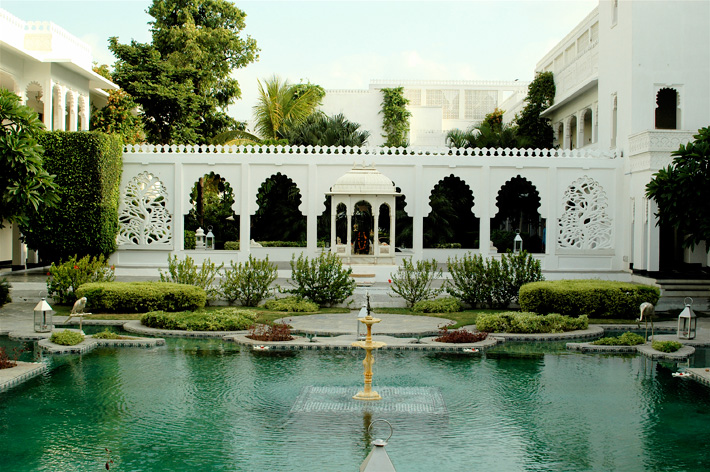 Peopled by proud turbaned men and delicately boned women in saris of dazzling colors, the “land of princes” is rich with possibilities and contrasts: You could bed down in some of the most sumptuous luxury on earth and then spend your days roaming ancient rural villages and exploring medieval marketplaces.

Perhaps the best reason to visit Rajasthan is to experience its unique hotels and world-class service ethic: The state has over a 100 heritage properties—castles, palaces, forts, and ornate havelis (wealthy industrialists mansions) – many of which are still home to India’s oldest monarchies, not to mention some of the best hotels in the world. Taj, Oberoi and Aman abound with their flagship destinations and yet between these multinational oases you will also find the distinctive once off family run estate, with a similar love and devotion for its guests.

From my initial welcome impressions of Rajasthan through Dungapur it was a scenic 2-hour drive to Udaipur, the famed ancient city on the lake or the “City of Sunrise,” often described as the most romantic city in India. Built around three man-made lakes, the placid blue waters reflect ethereal white palaces and temples, beyond which shimmer the distant Aravalli Hills. Udaipur has a real sense of space and peace, and the city is mercifully free of the kind of intense hustle that so marks the Indian street experience. This may have something to do with its proud Hindu history, for the city is not only known for its gracious palaces, temperate climate, and beautiful views, but for maintaining a fierce independence from even the most powerful outside influences. It fought bloody wars to repel Turkish, Afghan, Tartar, and Mongol invaders and rejected allegiances with the Mughals, only to acquiesce in 1818, when the state grudgingly came under British control. 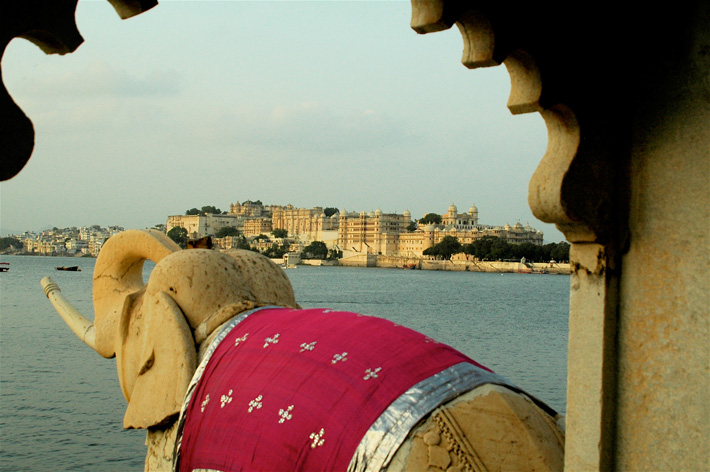 Udaipur and its surrounds is a luxury hotel junkie’s paradise with Oberoi’s Udaivilas, the famed Taj Lake Palace and the new Kempinksi Leela competing for your pleasures, and a little further out, the new Fateh Garh and modern Devi Garh. One can literally spend a week in a magical dreamland of ancient history, architecture, ornate design and world-class pampering, set in a context that one can only compare to a Disney-like mixture of Venice, Angkor Wat and the holy city of Varanasi. But it is not only the magical context, and the rich historical and romantic atmosphere that creates such incredible memories and experience. It is also how the precise execution and delivery of the people who serve you make it so.

Jag Niwas island is entirely covered by the Lake Palace, built by the Maharana in 1740 as a summer idyll and renovated, modernised and managed by the Taj Hotel Group, who do heritage hotels like no other. Today it is perhaps the most romantic and certainly the most photographed hotel in India. One arrives at the Taj Lake Palace lobby alighting by boat to explore the various courtyards, with their flowerbeds and fountains, ascending the roof, getting lost down a white marble passage with the scent of jasmine and lilies, being gently serenaded at dawn and dusk by the resident flautist, or being treated like royalty in the beautiful al fresco bar. Both standard and deluxe rooms feature wood paneling and murals, marble bathrooms, well-crafted furniture, opulent fabrics, and blissful Egyptian cotton linens; and recent renovations have also improved many of the public spaces. Best of all, everywhere you look – be it from the 263 year old mango-tree shaded pool, your room, or the restaurant – you have picture-perfect views: the statuesque City Palace walls and ramparts to the east, the whitewashed havelis and temples of the Old City lining the shores of the lake to the north, the Aravalli Hills to the west, or Jag Mandir to the south. My favorite spot was on a poolside lounger, facing the City Palace directly indulging in a selection of refreshing drinks and tasty nibbles, with glossy travel magazines to peruse.

The best rooms, aside from the fabulous suites, are the deluxe rooms facing east – the City Palace is lit up at night, giving you a 24-hour view. The huge and opulent suites (of which no. 116 and 117 housed the queen and the king, respectively) were thankfully left more or less as inherited from the royal family and have a timeless grandeur that the City Palace hotels could only wish for: stained-glass windows, marble floors, crystal chandeliers, antique Rajasthani furniture, and old-fashioned pieces that wouldn’t be out of place at Balmoral (Queen Elizabeth’s favorite residence) – making them the epitome of 20th-century royal splendor.

A must do romantic experience is to book an early evening treatment for you and your partner, and emerge de-stressed from your very own spa boat, moored on the lake, to the image of the sun setting over the Aravalli hills and the lights of the palace reflected in the water.

Throughout this opulent atmosphere there is utterly discriminating service and formal procedure and dedication almost to the point of ritual. The staff are beautifully appointed in their turquoise flowing saris, reflecting the water and catching the cool breeze off the lake and almost always greet you by your name. The evening dancing in the open-air atrium by the talented Banjari women and their players was perhaps the best I had seen in Rajasthan.

I thought that my first experience of Taj was particular to them only, and yet a few days later a similar dedication and devotion to the guest was replicated across the lake at Oberoi’s Udaivilas.

More of an expansive, verdant resort, which, with its numerous domes, Udaivilas has become a significant part of Udaipur’s western skyline; shimmering in the distance across Lake Pichola, it could well be mistaken for another of the city’s most majestic palaces but is actually a contemporary 2002 addition. And so one realises in this that the history of the actual hotel needn’t preclude the extraordinary experience. Oberoi staff are renowned the world over as perhaps the most discreet and attentive; their service levels are exceptional, all look absolutely beautiful and they are engaging, sincere and intuitive. Their concierges behave like personal butlers. They are always present when you need them, attending graciously to every whim, and then in a flash of a turban they are gone.

The palatial property features magnificent grounds (beautifully landscaped gardens as well as a wildlife conservatory where deer and peacock roam) and stunning interiors, including a massive central dome, lit up at night, that wouldn’t look out of place on St. Peter’s. Intricately crafted pieces and fabrics are artfully combined with Western decor to create the most elegantly dressed rooms and luxurious bathrooms in Udaipur; accommodations include comforting touches—piles of colorful cushions, linens in the most perfect cotton, and highly original artworks. If you’re a first-time visitor to Udaipur, you’ll want to reserve a lake-view room which has access from your own personal porch to a semi-private infinity pool that forms a veritable moat along the length of the accommodations wing; ensuring a constant view of the city’s mesmerising sights.

This level of experience and service was replicated to a greater or lesser extent throughout my travels in Rajasthan, and indeed in India. My point being that it was not only the preserve of the upmarket hotels catering to a travel writer. On the occasions I was unannounced or anonymous, I did not suffer any lesser treatment. This commitment to exceptional service appeared to me far more than simply a product of training. The passion and genuine concern for guests’ needs seemed to be almost cultural, as I had never experienced it before except maybe perhaps in Thailand and Laos, and even then it was in a different guise. At one suitably impressed stage I thought perhaps I was the recipient of the residue of the yielding approach to the British Raj, and then immediately berated myself for the thought.

I think perhaps the best way to account for this is the notion that is imparted to you by the Taj Jiva Spa masseuses. Before commencing their treatments they wash your feet in warm fragrant water flushed with rose petals, and before this they gently hold your feet and explain to you that they will be treating you according to the principles of Athithi Devo Bhava, or treating the guest as a God. It is this defining and instructive trait that the Indian hospitality industry has inculcated into its approach and values that sets it worlds apart.

David travelled to India as a writer for Frommers 4th Edition on India due out in a few months. Rajasthan was of course his favourite state. For any travel related enquiries please contact him on davidaone@gmail.com